The first time I met my cat, Sadie, she bit me twice. I was visiting her at the shelter, a week before taking her home. She hid in her bed for a long time before coming out for introductions. After she rubbed her head on my wrist a few times, she presented her ears for a scratch. I scratched her. She purred. Then I petted her. She bit me, not hard. Okay, I thought. Invitation only. Check.

About ten minutes later, after a successful one-pet-per-invitation interaction, I rested my hand on my knee. Maybe she’ll let me pet her again, I thought. This time I got a swat and a harder bite – not hard enough to break the skin, but hard enough to leave a mark for a day or two. “Is she in pain?” I asked the shelter worker. “I don’t think so,” was the slow, thoughtful reply. “We don’t know why she does that. She really wants to be near people and she’s very sweet, but she does bite sometimes. Not too hard though.” I watched Sadie walk around her small room. She stepped carefully and never leaped too high. When she sat, sometimes her abdominal muscles would ripple under her fur and she would lower her head.

Sadie is twelve and in the early stages of kidney disease. We learned later she also has arthritis, probably throughout her skeleton but particularly in her spine. She lived at the shelter for a long time before my partner found her picture online and sent me an email. “I know she’s old and a little sick,” read the email. “But she looks so sweet.” I scrolled through pictures. My partner was right, Sadie was sweet. And even then, I thought she was in pain. Something about her glazed eyes and the tilt of her head looked familiar to me.

One of my smallest, deepest sorrows about 2016, a year marked by loss and grief both in my own life and in the world, was the death of Umberto Eco. In my secret heart I had dreamed of studying semiotics with him in Bologna. I read all of his works, translated into English, during my early twenties while writing my master’s thesis. I thought that of everyone in the world, he might know how to begin answering the questions about text and meaning that haunted me, even when I tried to think about other things.

In his Norton lectures, published as Six Walks in the Fictional Woods, Eco uses the metaphor of a forest to demonstrate the different paths a reader can take through a narrative. Since no narrative can truly express every detail of its narrative world – as I learned from reading Jorge Luis Borges, a true map of the world would be the world itself – understanding a story depends on constructing meaning as you go. The text wants you to go in a particular direction, and it uses shared meanings to get you there. That’s the well-lit path through the forest: marked by signposts, trodden by many before you, clearly outlined. Some narratives have a more easily discernible path than others: think Sleeping Beauty as compared to Ulysses.

Here’s an example of how texts do this: if the story tells you the main character hears hoofbeats, you know there’s a horse. If you tell a child growing up with access to European fairy tales that there’s a princess in a tower, the child will often tell you there’s a dragon. These are some of Eco’s examples. Here’s one of mine, and maybe you know it too: if you find a dwelling-house in the woods, you should know there’s a witch inside.

What did it mean when Sadie bit me?

The most significant characteristic of my chronic illness is pain. Pain is a symptom and a diagnostic tool. The pain from my illness is different than the pain I experience in, for example, my wrists when I type too much, or my lower back from various traumas, or my neck from an injury sustained in a car accident. The different pains can amplify each other and sometimes I am too overwhelmed by pain to know what kind it is, where it is located, why it is there. When the pain is too much for me to manage I want to bite too.

Another important part of Eco’s forest metaphor is that you don’t have to follow the well-lit path. You can go another way. Most texts have many layers and levels. Sometimes we call these subtexts. If you want to show someone else the path you found, you have to point out how you got there. In a forest, this could look like tying red ribbons to branches. In textual studies, this looks like argumentation. The point is that you can choose, and some choices are more easily supported by evidence than others. Maybe the path you chose leads to a river and you found the rocks just beneath the surface to cross it. Maybe there’s quicksand in the bog and you can leap the branches like a squirrel, and show me the trees you climbed to make it through.

Other paths are yours alone, and no one else can follow you. That’s okay. The path – the story – is the negotiation of meaning between you and the text. You can make your own choices.

The strange thing about pain is that we cannot accurately remember or imagine it. Our minds do not let us. We can think about thinking about it. We can imagine the thoughts or feelings we might have from pain. But we cannot imagine it as it is. In this way I think of pain as a singular experience, unique in each moment and always solitary.

Sometimes the story of my pain is a forest. There is a well-lit path I can take people down. “Many people with my condition say it is like having influenza, the respiratory one, only ten times worse,” I’ll tell people, if they ask. I’ve never had influenza, but people tend to react strongly so I think it’s probably an effective metaphor.

If people keep asking, I’ll take them down some other paths: more hidden, but still pretty clearly marked. “Sometimes I can’t get out of the bathtub,” I’ll say. “Or bed. Or I can’t walk, or eat.” People nod. Most of them know what it is to walk, to have a bath, to eat. They can imagine what it might feel like not to be able to do these things at unpredictable moments. I don’t point out that that is not the same thing as pain. Pain and the limits pain enforces on you are different. But that’s okay. The path is the story and the story is about making a connection to another person. This is one way to do it.

Rarely, a person will keep asking. “But what does it feel like?” they want to know. I try to tell them. Maybe it feels like a small metal trowel is moving through the part of my body between my skin and bones like a fork lifting strands from spaghetti squash. Maybe it feels like my flesh is made of thousands of tiny corrugations ripping my skin from beneath. Maybe it feels like all of my bones are glass and they broke and the shards are inside me. Except none of that has ever literally happened to me so I don’t know that that is what I feel. That’s just the best I have, in the moment.

Those paths are secret ones. Not everyone gets to be taken down those paths. Now you do.

In the heart of my pain lives a tiny forest house, with a thatched roof and a chimney and a ragged garden of nightshade and hemlock. Inside the house there is a witch. There is no path to the house. I cannot show it to you. You cannot live there with me, even if you want to. Even if I want you to. There’s no story I can tell you that will bring you here to me.

Somehow my partner found me in that tiny house, in the heart of my pain. I’m not sure how they got there. I don’t know the secret ways and there’s no path. But here they are. When the house is cold they build the fire. When it rains they place a bucket under the leaks in the roof. They light candles in the dark and make tea from leaves in the garden. They don’t know what it means to be me in the house of my own pain. They don’t need to. They know the shape of it, the taste. They know I cannot leave it, that I didn’t choose it, that I am witchy and ragged and brave because now I have no other way to be. We didn’t choose it and still we are here. Still I am here.

Sadie is getting used to her new home. Like other cats, she prowls at dawn and dusk. She traces her own paths throughout the house – around the couch, under the table, up and across the bed – over and over. At night she has her secret cat life. In the day she sleeps, often under the covers of our bed. I am comforted by her warm body against my calves when I too spend the day in bed. Her fur is very soft. When she leaps onto something high up, she is cautious. She walks gingerly. Her back is curved near her tail and her back legs are ever so slightly out of step with each other. In the two and a half weeks we have known each other, she has become much more affectionate. I am now allowed to scratch her ears and smooth her soft fur as much as I want to, as long as I do not touch her spine.

Our veterinarian agrees that she probably is in pain, and has suggested some medication for her in a few months, once she is more settled. I know that I understand the forest of Sadie’s story through the lens of my own paths. My wish for her to have less pain is also a wish for myself; my desire to give this sick old cat a home is also what I want for my own life – a safe place where I am loved, where my pain matters, where the limits pain enforces on me are not the whole of me.

I don’t know the way to Sadie’s secret heart. I don’t know if she is truly in pain or what that might feel like to her. Still, the path of her story that I follow is the one where I am very gentle and patient with her, even if sometimes she bites or scratches me. The meaning I create from our shared lives is that there is a secret tunnel from her cat-heart to my witch-heart and sometimes, just sometimes, we can sit together, painfully alive. This is the story I tell, the path through the forest I choose. 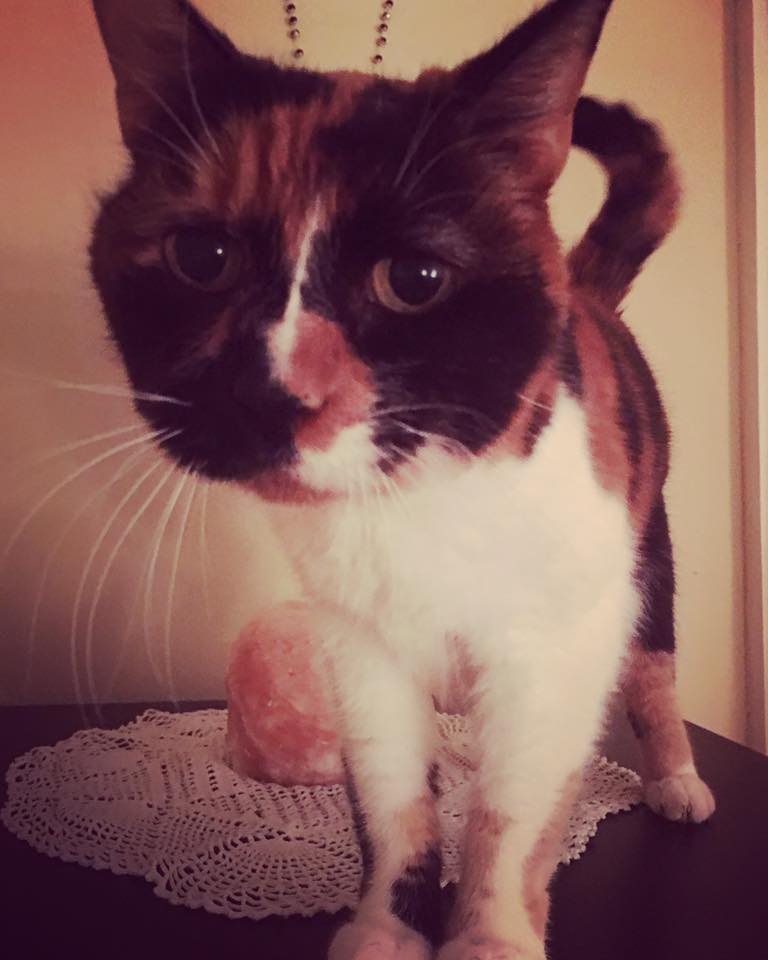